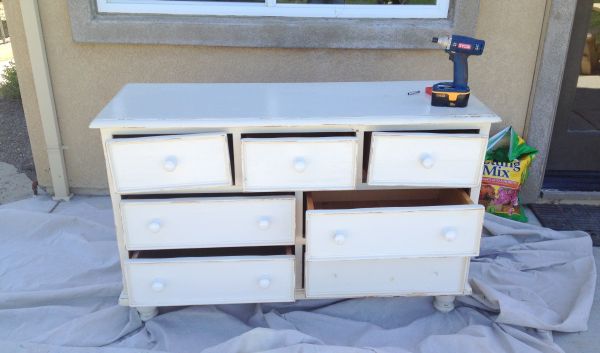 Usually, when you want to give a piece of furniture a makeover, you just add a fresh coat of paint. This was the case for this bedroom dresser too but only the first time. Originally, the owner found this dresser in a friend of a friend’s garage. It was in good shape but needed to be repaired a little. It also needed a fresh look so it was painted white.

The dresser was sued for seven years. After all this time it was starting to lose its charm again. When the owner decided that the bedroom needed a makeover, the dresser had to be involved in the process as well. However, instead of simply adding a new coat of paint on top of the old one, a different idea was used. The owner stripped the dresser but leaving thin traces of white paint behind. The dresser was then sanded and treated with a prestain wood conditioner. Now it was back to its original look.


The dresser got a lovely update, not in the way most of us would have expected it but by adopting a more unusual approach. The result was a charming vintage piece of furniture with a deliberately aged look. By adding glass knobs to the dresser, the owner achieved exactly the desired look. Some old metal casters completed the image.{found on redouxinteriors}.